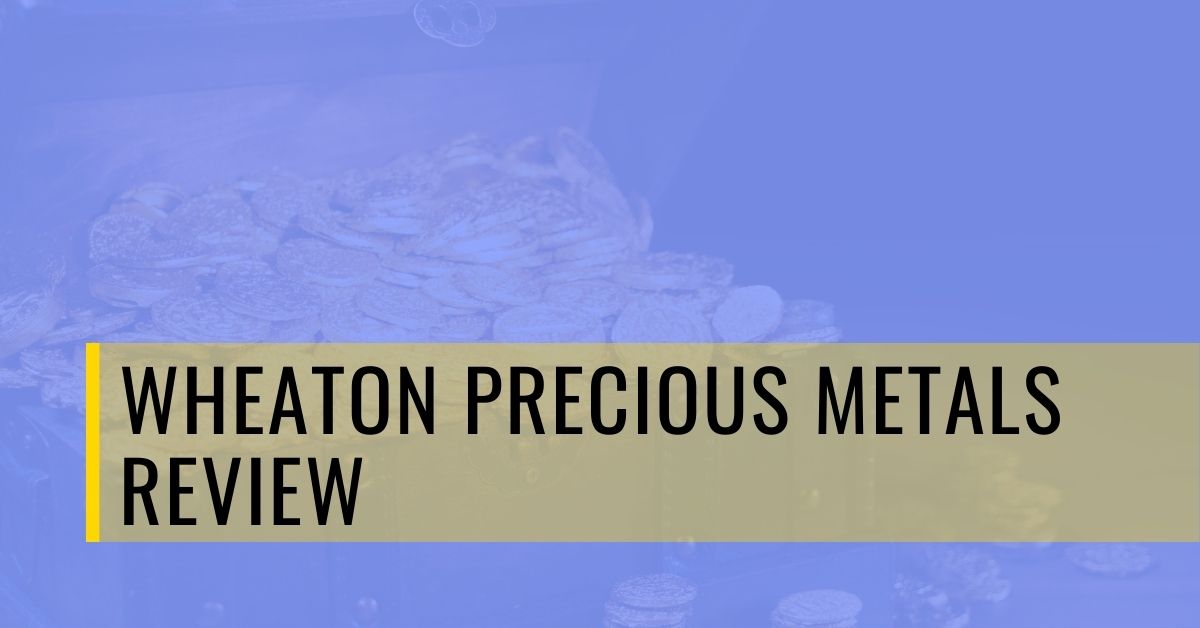 Disclaimer: Some or all of the companies listed here may provide us compensation. This is partly how we keep and maintain our free services for consumers. Compensation and in-depth research from our team determines the results of our reviews.

Wheaton Precious Metals is a mining corporation that mines gold and silver. The company's main focus is on silver. Unlike some other large mining corporations, they have not branched into copper or other precious and semiprecious metals. Headquartered in Canada, the company oversees multiple mining operations today.

Important: Before we move on with this review...

Picking a company to invest with is a HUGE financial decision. We have done years of research (updated often) and want to share our results with you before you make this important decision.

Or you can checkout our top recommended company right away below:

Otherwise, feel free to continue with our in depth review of Wheaton Precious Metals below!

Though Wheaton Precious Metals is not the largest mining operation in the world, it is a very sustainable one. Since 2004, the company has generated hundreds of millions in total revenue. They have a large amount of silver assets, and their net income is more than $100 million annually.

Unlike some of the larger mining operations, Wheaton Precious Metals remains a relatively small business. It employs just 35 people full time, not counting the staff who work in the mines themselves.

The company was originally called Silver Wheaton, but changed the name in 2017 to reflect their expanding market. Every year, the company mines more than 25 million ounces of silver and sells almost 30 million ounces that was mined by other corporations.

As a publicly traded corporation, people can purchase stocks for their own portfolios. Some people invest in these stocks rather than investing in precious metals because the stocks pay dividends. At the same time, actual precious metals are a more stable investment, and they have fewer variables affecting them than stocks.

The company was first established in 2004 under the name Silver Wheaton. At the time, it was a subsidiary of the company Goldcorp. That changed in December of 2006, when Goldcorp sold most of its shares and lowered its total ownership to just 48%. That allowed Silver Wheaton to operate independently as its own company.

It was less than two years later, in February of 2008, that Goldcorp completely separated from the company. They sold more than 100 million shares for a total of more than $1.5 billion dollars. This led to Wheaton's ownership being much more scattered among individual shareholders and some larger corporations.

Wheaton acquired a company called Silverstone Resources in 2009. This company had previously been publicly traded, but it was taken off the stock exchange after Wheaton took it over. As the company was absorbed into Wheaton, its shares began trading under Wheaton's name instead.

One of Wheaton's biggest expansion opportunities came in 2020, when they were able to begin trading on the London Stock Exchange.

If you're interested in investing with a company, it's important that you understand what their business model looks like. Businesses need to have a "moat" if they intend to stay in the game for long. The "moat" refers to how well a business can keep an advantage over their competition in the long term.

If a company doesn't have an acceptable moat, they are vulnerable to market competition. The competitors could eclipse them and cause their shares to tumble in value.

Wheaton Precious Metals does not have an entirely unique business model. However, they do have certain advantages above other mining corporations in the sector.

Here are some of the key highlights of how Wheaton sets up and operates its business:

All of that is pretty impressive. There are definitely risks to relying so much on intangible assets, but Wheaton has been successful in its contracts since it was first created. They have a symbiotic relationship with their competitors.

Since the company has such a niche focus, they're able to negotiate contracts that adhere to their goals without taking too much away from the other company. They also aren't liable for any issues with the mines themselves.

Occasionally there is some confusion. For example, there was a time when a parent company sold their mine to another company. Wheaton had a contract with the first parent company, but they needed to draw up a new one with the buyer instead.

The current president and CEO of the company is a man named Randy Smallwood. He went to school at the University of British Columbia and received a geological engineering degree. Following this, he received a mine engineering certification.

Randy has been part of the board of directors for many mining operations, such as Ventana Gold, Castle Peak Resources, and Defiance Silver Corp. On top of this, he serves as the chairman for the World Gold Council. He was given a Distinguished Alumni Award from his alma mater and received a prize for being the enterprise CEO of the year in British Columbia.

Wheaton Precious Metals has an individual contract with each of the mines it works with. Most of the time, the company offers short agreements in exchange for the yield of another company's mine. This allows them to increase their holdings without needing to invest major capital in developing all-new projects themselves.

They do have at least one current contract that runs for as long as the mine's lifespan lasts. That applies to the Mexican Penasquito mine. This mine is among the largest silver mines in the entire world, ranking as the second largest silver mine in the country of Mexico.

2013 was when the company expanded its gold acquisition again. They started to acquire gold from three mining operations. Though their acquisitions were relatively small in comparison to their silver acquisitions, the gold did make a measurable impact on their income.

Today, Wheaton operates with 15 agreements taken with 11 other companies. They exchange some of their income and resources for the sake of a percentage of the mined minerals. They are able to create these agreements due to having large amounts of cash on hand with which to pay, as well as having strong relationships with the precious metals mining network.

The agreement with the Penasquito mine may be unique in that it might be the only contract Wheaton has that lasts for the mine's entire lifespan. This arrangement makes sense, since Wheaton chiefly exports silver and Penasquito is an extremely large silver mine.

In fact, since Penasquito is the fifth-largest silver mine in the entire world, and since Wheaton has a 25% interest in the output, that means that Wheaton owns one of the top twenty-five biggest silver deposits globally.

The mine is predicted to offer around 7 million ounces of silver every year for a whopping 22 years.

Penasquito is also a producer of zinc, copper, and lead. However, Wheaton doesn't appear to have an interest in these metals. They have never branched into selling anything other than silver and small amounts of gold.

Unlike many other mining corporations, Wheaton Precious Metals does not own the mines or operate them. This is part of how the company has managed to keep their staff numbers so low despite having millions of dollars in revenue.

Rather than acquiring the mines themselves, Wheaton strikes up contracts with the owners of the mines. They pay cash for the mines to be developed, and then they receive a cut of the silver and gold for a predetermined amount of time.

In fact, with most of the company's contracts, they have full claim to all of the silver that is mined by the project. The mine's owner gets to keep any gold, copper, and other precious metals that are unearthed. In the case of the Minto Mine, Wheaton is contracted to receive all the gold rather than the silver.

There are six total mines that make up the bulk of Wheaton's silver operation. In addition to the Penasquito mine, they include the San Dimas, Zinkgruvan, Cozamin, Yauliyacu, and the five-part Barrick mine. They receive gold from the Minto mine.

On top of these operations, the company has contracts with six more small mines. Combined, these mines make up around 22% of the total silver intake, with 78% coming from the larger operations.

Goldcorp was the original owner of the San Dimas mine, but they sold it to Primero Mining in 2010. This caused some complication because Wheaton had created a contract with Goldcorp that entitled them to the silver. After the mine was sold, Wheaton engaged in a new contract with the new owner.

The Barrick agreement isn't actually about one mine. Instead, they have created an agreement with Barrick Gold to acquire the silver from several of their mines. Among them are the Veladero in Argentina, the Pierina in Peru, the Lagunas Norte in Peru, and the Pascua Lama.

The deal for the first three mines occurred in fall of 2009. In exchange for depositing more than $200 million, Wheaton was given full rights to the silver that those mines produced through 2013.

The Pascua-Lama contract is slightly different. Instead of having full rights to the silver, Wheaton only receives 25% of the silver. That contract lasted between 2013 and 2017.

Silverstone is a company that was acquired by Wheaton. With it came all of its assets and agreements. The company is entitled to the silver produced in two mines located in Portugal, for the entire life of the mine. Lifetime contracts are unusual.

Part of the reason that the company could make this deal is because the mines are mostly made for zinc and copper. The amount of silver yielded is negligible and not of much interest to the mine owner.

Wheaton expanded their gold when they created an agreement with Mine 777, which is owned by HudBay Minerals. This mine became the source of more than half of all of Wheaton's gold in 2012. In fact, in the final quarter of the year, it managed to produce more gold than the other gold mine did during the entire year.

Gold is a much more expensive asset than silver. To determine how the production compares to silver, a silver-gold ratio is used. With that in mind, the gold from the 777 mine was responsible for more than 40% of Wheaton's production increase for 2012.

Is Wheaton Precious Metals a Scam?

Wheaton Precious Metals is not a scam. It is a publicly owned mining corporation that has been operating out of Canada since 2004. The company mines gold and silver from a variety of different locations. Rather than purchasing the products themselves, you can buy shares of the company and earn some of the profits.

Stock purchases come with a fair number of risks, but they also have a greater potential for reward than buying precious metals. Precious metals themselves, on the other hand, tend to be stable investments that are better for long term growth.

Wheaton Precious Metals is one of several precious metals mining companies that is publicly traded. If you purchase shares, you will partake in some of the profits each quarter. The company does produce hundreds of thousands of ounces of silver every year, and it has millions of dollars worth of silver reserves.

With that said, it's not the largest precious metals mining company. There are also questions about the company's ongoing environmental impact and sustainability. They may not be able to develop new projects that are lucrative enough to replace the current ones once those dry out.

If you want to purchase actual precious metals, this is not the place to go. If you want to invest in the precious metals industry without investing in alternative assets, this is a compelling choice. Just research the competition while you're at it to see whether anyone else has performed better for investors over time.

Overall, we believe that there is a better option when it comes to your investment.

The above company is our top recommendation after doing extensive research. Feel free to keep doing your own research, or you can visit Wheaton Precious Metals below!